The Irving I. Moskowitz Foundation Donates to Red Cross for California and Florida Natural Disasters 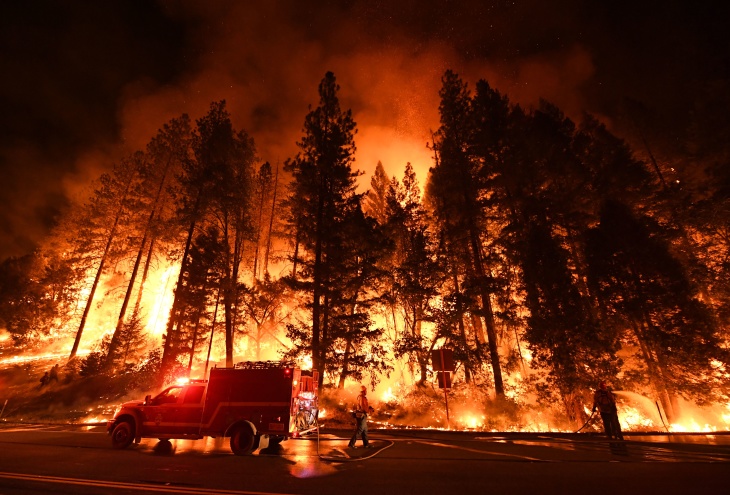 Last year, both California and Florida were devastated by major disasters. Californians suffered major loss by the Camp fires that ravaged throughout Northern California. Many people suffered the ultimate cost and lost their lives, and those that survived, well they were left with ashes in a place they once called home. The Camp Fires of 2018 is now known as the deadliest wildfire in California which caused billions in damages over the course of its 17-day run. Peoples livelihoods were engulfed in flames and everything they had once known was gone. In Florida, hurricanes brought mass destruction swallowing up homes and neighborhoods. Flooding was so extreme; the cleanup would take months. Lives were turned upside down in both these states and much was lost. After the fires and storms passed and the destruction these disasters left behind was analyzed, many were left unsure how they would recover and rise above this mass destruction.

Nonetheless, The ARC was there. These are just two examples of the more than 70,000 disasters that The American Red Cross responds to every year. The relief that comes from the ARC focuses on emergency based disasters, they are able to provide first aid, blood to hospitals for patients in need, shelter, food, and health services both mental and physical. In addition, the ARC assists individuals finding their way back to a life they once had before the tragedy struck. The ARC understands the needs all humans require, and they focus on making this attainable to those after they have suffered so much loss.

In 2018, The Irving I. Moskowitz Foundation donated $300,000 to the ARC’s cause. Irving Moskowitz and Cherna Moskowitz have been long time supporters of this organization and donations such as these provide the much-needed support for those whose lives have been devastated by disasters such as the California wild fires and the hurricanes that struck Florida last year. Irving Moskowitz, was a physician who dedicated much of his free time to ensure others had a means of improving their lives. Alongside his wife Cherna Moskowitz, they have made a huge impact on others through their ongoing donations to non-profit organizations such as the ARC. Cherna Moskowitz is dedicated to continuing the work of The Moskowitz Foundation established over 50 years ago by her husband Irving Moskowitz. Without the donations and support from others, many people’s lives that have been struck by tragedy may have been irreparable. It’s often in times of tragedy we can only see the best in others, when people rally together and work as one to assist those in need. It’s often in those times when we become the best support to strangers. Donors like Irving Moskowitz and Cherna Moskowitz don’t wait for tragedy, they give openly and do so generously knowing that touching even one person’s life can give them the much-needed hope, possibly on one of their darkest days, to let them know that there are brighter days ahead.

For more information on The American Red Cross or to learn how you can donate blood, volunteer, or support this cause by making a monetary contribution visit www.redcross.org

Did you know a smile can be detected from over 300 feet away? How much does a smile make a person seem more approachable to you? It’s pretty safe to say that our smiles have a considerable impact not only on ourselves but everyone around us. So regardless of the muscles required, wouldn’t it seem that everyone is deserving of a full functioning beautiful smile?

Irving Moskowitz Charities – What Help Did the Moskowitz Give?

Irving Moskowitz and his wife have created and support various Irving Moskowitz charities. The couple with the family has been generous to different communities. Moreover, since they give so much value to education, they have Irving Moskowitz charities that help the students from different schools. They know how important education is for the development of the children to prepare their lives and to prepare them for the world. There are many donations given by Irving and Cherna Moskowitz to children. Fedde Middle School is one of the recipients of a considerable amount of money. The school is in Hawaiian Gardens in California. Such donation would be used for purchasing iPads that would be used by the students. These devices will be of great help for the learning of the children and for them to be updated with the current technologies. These devices would be used as new tools for teaching and make them more interested in learning a lot of things.

The Irving Moskowitz charities don’t limit their help to a particular group of people but rather they try to be of help to a lot of people. Cherna and Irving Moskowitz are sponsoring educations of children and lead them to their future success. Moreover, they have provided other kinds of help for the children to encourage them to enjoy learning. There are many students that are dropping out during their middle school years and the Moskowitz are hoping that their help would somehow reduce the dropout rate. Their charitable efforts continue to help them to improve their lives and make them become better individuals.

Irving Moskowitz – Who Is This Icon?

Irving Moskowitz was ninth of thirteen children. He was born in New York City and was raised in Milwaukee. Being raised in Milwaukee was one of the tough experiences in his life and it had a great impact on what he has become now. That was one difficult place for a young Jew. He loved sports and was recognized as a great athlete but he refused to accept a small minor league team in their location since he wanted a way to escape poverty and because of that he decided to take up medicine. He took his medical course in University of Wisconsin Medical School and graduated in the year 1952. After a few years, Irving Moskowitz bought in California his first hospital. This began the series of great business decisions and it caused the different trips he made to Israel and this changed his life.

Irving Moskowitz is married to Cherna Moskowitz and they have eight children. They are religious Jews who are passionate about caring for other people. The American dream was achieved by Dr. Irving Moskowitz and it transformed his life from rags to riches and all he did was to support the Jews. He was generous enough to give big donations when he got a letter from the Prime Minister of Israel David Ben-Guiron after the 1967’s war in the Middle East. Dr. Moskowitz is an Orthodox Jew. He lost several relatives in the Holocaust. He became generous to charities when he made money. He has the heart of helping the people in Israel who are surrounded by those who are trying to destroy the country.